I LOVE doing races in Korea but registration is usually in Korean so I thought I’d do a blog with some vocabulary and instructions.

1. First, decided which race you want to do. Head over to marathon.pe.kr. You should see this home page;

2. Across the top, you’ll see the different tabs. You should press the second from the left. It’s called 대회일정 (tournament schedule). Then you’ll see this;

3. Now you should choose the location you want. Races happen all over Korea. Personally, I stick to the ones in Seoul and there are always a tonne in 여의도 (Yeouido). Choose your own and click on the link to be brought to this;

4. Near the bottom of that page, you’ll see a link. That brings you to the home page which is where you need to go. The home page might look something like this;

5. Now you have to look for the registration are. Some home pages make it really easy and others make it a mission.  Look for 참ㄱㅏ신청 (Application for registration). When you click on it, you’ll probably see some of the following;

Here is the vocabulary you need to know;

입금ㅈㅏ명: Name of person who will send the money

Once you click “enter”, you’re done. Just transfer the money into the bank account. You’ll find the bank details on the home page of the race.

About a week or so before the race, you’ll get your package with your gear, number and chip.

Apologies if there are mistakes in the Korean. Any questions, just ask!

The Nike “We Run Seoul” race is one of the most hotly anticipated races in the city. So much so, that registration only opens 2 weeks before the event. On that day, Koreans everywhere sit beside their computers to get a place. The race only has 2 divisions, 10km and 21km. There are 20,000 spaces for the 10km and 10,000 for the 21km.

While I wasn’t exactly sitting and waiting for the registration to open, I did try that day and failed to get a place. My Korean friend, however, got a place and couldn’t do it so she gave it to me!

The gear arrived the week before the race and the pack was a simple Nike t shirt, a plastic bag (for storing your gear on the day), the number and a voucher. The chips were already glued to the back of the number so that made it more convenient than usual.

The race itself was a bit of a let down. First, it is important to show up early, as your gear must go into the lorries before 2pm. Since the start and finish points are different, the lorries go ahead of the runners and you can collect your stuff at the finish line. The race doesn’t actually start until 3pm. That leaves lots of time for lunch, coffee, stretching, whatever. Runners are divided into 4 categories, A,B,C,D.A & B are the long distance runners and they leave first.

Hanging out in Gwanghwamun before the race. 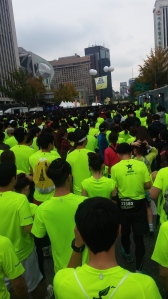 I was group D and despite doing my best to get close to the top I couldn’t and ended up a long way back. I could hear the M.C. talking to the crowd and if I heard the “Just do it” slogan one more time, I would gladly have jumped up and shoved the microphone down his neck. A lot of people looked like they were there to try out for Nike models and looked fit to do anything BUT run.

Eventually the C group left and since there were just so many of us we got to leave together. Because the stage was by the start line and the M.C. was some famous guy, everyone wanted a picture which slowed the whole thing down.

The race started in Gwanghwamun and finished in Yeouido and it was lovely to see people either side of the road cheering you on.  The sheer volume of people made it close to impossible to run. I initially thought it was space out after the first few kilometres but it didn’t. A kilometer 5 there was a band playing and of course people just stopped up for pictures creating another pile up. Just as we were almost finished, the road narrowed and there was a bottle neck of runners. After that though, the sprint to the finish line was clear.

All in all it’s always good to do a race and it was great to see so many people getting out and involved. If you’re a serious runner I recommend you do the 21km. I can’t see myself do that particular race again but getting to run through the city was really nice. 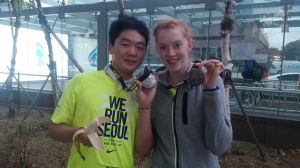 My friend and I at the finish!

Ilsan is undoubtedly becoming a very popular place. Recent construction has seen the arrival of One Mount, MVL, Aqua Planet and lots of new apartments to deal with the increased population. It’s just a short drive from Seoul and it’s a really fun city with lots to offer.

One of my favourite things to do in Ilsan is a trip to Lake Park.  Lake Park covers a HUGE area, over 900,000 square metres and boasts the largest artificial lake in Asia.

These days, I go to the park to run. The track around the perimeter covers approximately 4.9km and it’s so wonderful to see the assortment of walkers, cyclists, runners, skateboarders out and about exercising. The walking trail is longer at about 8.9km. There is also a basketball court and a game area.

If you’re not that into exercising, fear not. There are a tonne of things to do in the park. It’s the ideal venue for a picnic and a get together with your friends. It has lots of open spaces for people to sit and enjoy. I’ve gone with my friends a few times and the atmosphere on a Sunday afternoon is perfect. It’s peaceful and relaxed and you can spend the afternoon people watching is you wish.

It’s a great place to bring your family. There are lots of things for children to see and so.

You can easily get lost in the park. Even a gentle walk will bring you to pagodas, gardens, the cactus centre, the mini zoo, there is such a variety of things to do here, you can never get bored!

At the weekend, you are bound to find live entertainment in the park. There always seems to be a band or singers performing and entertaining the crowd.

A few tv dramas have been filmed here also, the best known probably been Star’s Lover. 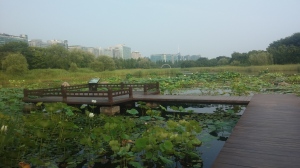 The musical fountain is also here. You can enjoy a performance several times during the day.

Really close to the park is One Mount and Aqua Planet. One Mount has both a water park and a snow park as well as shopping so together, this could be the perfect get away from Seoul!

For those with a car, there is a car parking fee. It is 300 won for the first 30 minutes and an additional 100 won for every 10 minutes after that.

Exploring Ireland and all it has to offer