I’ve always thought that there was a direct correlation between mass-produced products and the words “Made in China”. Heading in to this challenge, I didn’t think it would succeed in changing my opinions on products but now that I’m on the other side, I couldn’t have been further from the truth.

When I first started, I went through the clothes in my wardrobe looking for those” Made in China”. Some of my clothes were and some of my clothes weren’t. Those that were made in Philippines or Vietnam made me wonder whether they were any better or worse than the ones made in China. Who are the real people behind the clothes?  A few years ago, I watched a fascinating documentary as they went under cover to some of the factories in England where clothes for a major brand were being made. These sweat shops were full of Asian women brought into the country to work 12 or 13 hour days sitting at machines in dark rooms to produce the clothes that we all bought for 6  or 7 times what the received in wages. So just because some of my clothes weren’t made in China didn’t mean that they were made under better conditions. But when you start to think like this, when can you stop? You can’t boycott all the clothing chains in the world because you somehow suspect that they’re labour conditions aren’t up to scratch but it certainly opened my eyes the possible conditions in which our clothes are being manufactured.

After writing my first post about the challenge, I received a comment to say that I should post my findings on this website. An entire website dedicated to products not Made in China. Who would have thought? Not me, that’s for sure. If you’re looking to boycott Made in China for longer than a month, this is the place to go.

So, after my month of no Made in China, how did I do?

Food; This was too easy. Loads of food stuffs is either made in Korea or another country but easy to avoid China here.

Clothes & Shoes; A mixed bag . It’s easy to find Korean made clothes in small independent stores. It helps if you’re the same general size as Koreans or if you’re happy with “free size” products. For fitted or Western style clothes, you’ll have to look harder but not that hard. During October, I bought a sweater dress from United Colours of Benetton. It was made in Korea. I literally couldn’t believe it. I also have a Mountain Hardware jumper that was again made in Korea. It goes to show that you don’t have to give up your labels if you’re not buying Made in China.

If you want to but a pair of shoes though, you have to look everywhere.. Honestly, every shoe shop I went in to had their shoes Made in China. Even the expensive stores. Eventually, my friend Janet, found a store  , and bought some shoes (which I then bought from her) and they were made in Korea. Woop! Success. Of course, I can’t guarantee this of all the shoes they sell, but it was the case for my pair.

Cosmetics; The easiest thing to buy. All the big brands, Faceshop, Missha, Etude House are all Made in Korea so you can buy as much makeup as you like.

Some of my Made in Korea purchases.

Handbags follow the same line as shoes.  All the big brands make their bags in China. This really bothers me. Take an expensive bag, an Orla Kiely for example. Bags from this label are extremely beautiful, there is no question of that. The designer is originally from Ireland but now based in London. So when I thought to check, I expected that they were made in Europe at the very least. No. Made in China.  It surely defeats the purpose of marketing this well thought out, well designed bag to an audience that has money and style ( average bag is about 100$), if it’s made in China. Surely. It ultimately means that there’s no difference between that expensive bag and the one I picked up in a market for 10$ if both are made in China.

The greatest disappointment of the project was this computer I’m writing on.  I bought it a few weeks before the challenge started, its a Samsung Ativ. Being Samsung, a Korean brand, I looked at the tablet and keyboard dock expecting to find them made in Korea, only to find that they were both, Made in China. The disappointment almost made me give it back for a refund. Almost.

In good news, I rediscovered that Baush and Lombe contact lenses are made in Ireland. Hurray for Ireland! In all honesty, I’m glad this challenge is over and that I did it. I’m much more aware now than I was at the start.  While Made in China is not as prevalent as I expected it to be in Korea, there are still products out there that you would struggle to find made anywhere other than China (cups, plates, socks)

As ever, feel free to leave your comments below.

That got me thinking. With China as our closest easterly neighbour, how easy or difficult would it be to refrain from buying anything that was “Made in China”? How much of an influence do they have here and how many items that I use everyday are actually “Made in China”? After mentioning it to a friend, we decided to go without buying anything “Made in China” for the month of October. I honestly have no idea how easy or difficult this will be as I have never put too much thought into it before.

The other rule is that as far as possible we must support the home market, in this case Korea or if at all possible our own home markets, Ireland and South Africa.

So that’s it, the October challenge. I’ll write another blog on the results and observations of this challenge in November. 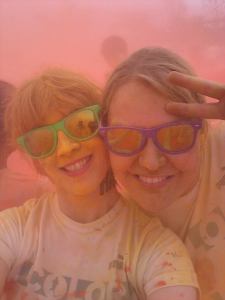 Exploring Ireland and all it has to offer